Description of MUCH ADO ABOUT NOTHING’s plot and characters:

One of Shakespeare’s funniest romantic comedies, the primary plot of CenterStage in Lake Forest’s adaptation of Much Ado About Nothing focuses on the courtship and scandal involving the kind, lovely Hero and Count Claudio.

HERO (ALLY CROSS) is the only daughter of LEONATA (MAGGIE SPEER), who is the widow of a wealthy, powerful landowner, the former governor of Messina (Italy). Hero’s impulsive and passionate suitor, COUNT CLAUDIO (JEREMY SCHAYE), has just returned to Messina from serving the energetic and charismatic DON PEDRO (NICK BONGES), Prince of Aragon (Spain), in Don Pedro’s victory over DON JOHN (DAVID FEILER), Don Pedro’s illegitimate elder half-brother, who was attempting to overthrow his popular younger half-brother and seize the throne.

COUNT BENEDICK (EDWARD KUFFERT) and BEATRICE (SAHARA GLASENER-BOLES) have engaged in verbal dueling for several years, ever since an earlier attempt at a romantic relationship between them disintegrated when Benedick misunderstood Beatrice’s feelings as light flirtation, and he left her to serve a war without even saying farewell.

When Count Claudio confesses to being smitten with Hero, Don Pedro volunteers to woo her for Claudio at the masquerade Leonata is giving to celebrate Don Pedro’s victory. Successful in gaining Hero’s acceptance to the proposal and Leonata’s permission, Don Pedro presents Hero to Claudio, and the two young lovers plan to marry in a week.

Don Pedro then decides to pass the time until the wedding, by playing Cupid again, this time with the help of Claudio, Leonata, her brother ANTONIO (C. ARTHUR KENNETT), Hero, and her waiting gentlewoman URSULA (KENDALL ROMERO) in tricking Benedick and Beatrice into falling in love with each other.

But all is not love and fun in Messina. Don Pedro’s disgruntled half-brother, Don John, resenting Don Pedro’s victory and popularity, plots to ruin Hero and halt her wedding to his half-brother’s friend Claudio. Don John’s machinations are aided by BORACHIO (ARIK BEATTY), a gentleman soldier by birth who has fallen into hard times joined forces with Don John, and Don John’s mistress CONSTANCE (KATHERINE DAMISCH). Don John takes Borachio’s suggestion to deceive Claudio into believing Hero is false to him, with the unwitting assistance of Hero’s maid, Margaret, who flirts with Borachio from Hero’s bedroom window the night before her wedding, while Claudio and the Duke watch secretly from a distance, under the delusion that the girl at the window is Hero.

At the wedding Claudio denounces Hero and leaves her apparently dead from shock, while Leonata, Beatrice and Benedick, amazed at the situation, decide that with the aid of the priest, FRIAR FRANCIS (STUART CONLON), Hero’s recovery should be concealed until her name can be cleared. And indeed, with the help of Friar Francis and the repentance of Borachio, the play comes to a joyful conclusion—which you will see at our performances.

Much Ado About Nothing rehearsal images… 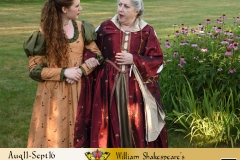 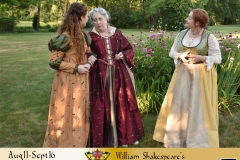 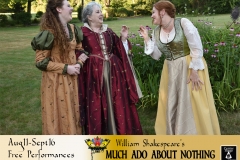 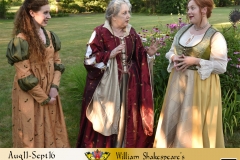 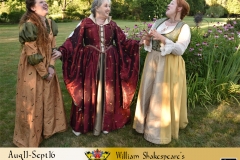 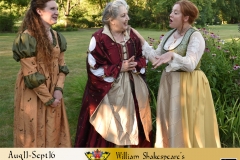 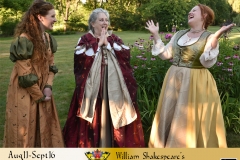 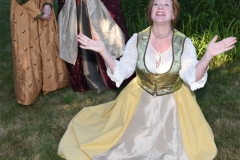 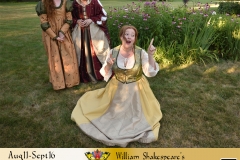 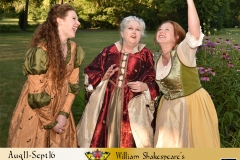 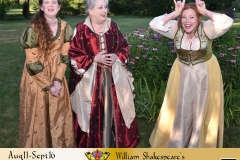 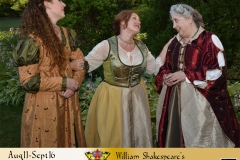 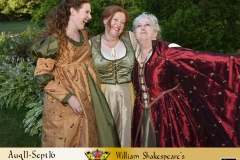 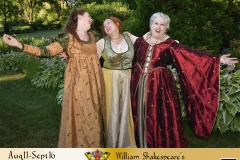 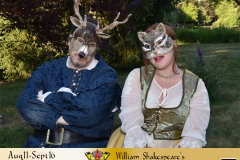 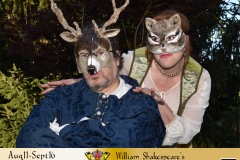 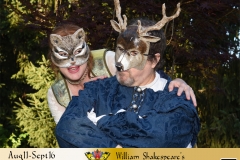 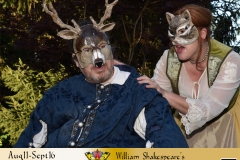 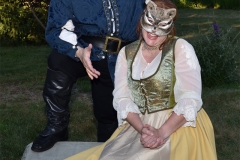 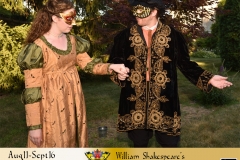 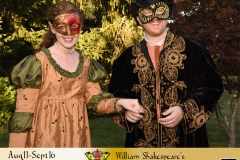 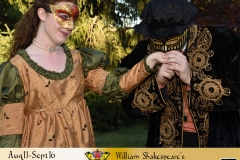 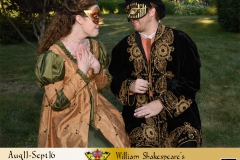 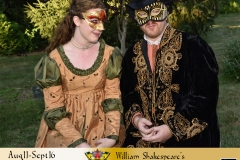 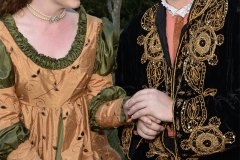